My visit to the New South Wales hot rod show at Rosehill Raceway in Sydney a week or so ago was a complete success. The show is different from the VHRS one held on Australia Day and different again from the WA Street Rod spectacular that is later in the year. But every bit as charming…and with features that they other two do not have.

My attention was arrested immediately upon entering the lower pavilion floor when I saw this 1960 Holden. I must confess it took me a while to comprehend what I was seeing, and then I pored over it all over again to see the details of how it was done.

At this stage of the game I would invite my readers to Google up the standard 1960 Holden and see what all the fuss is about. Then sit and contemplate what sort of drinking session could have started the whole idea off. I cannot even imagine what was going through the builder’s mind. 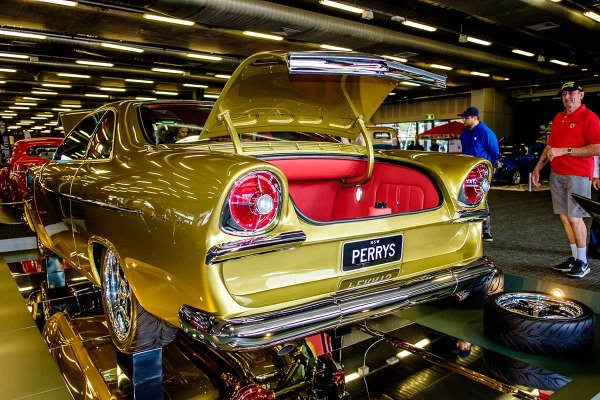 Done well? Absolutely! A delight to drive? Well, that’s hard to say, but the value as a head-turner is incalculable. Unfortunately by now the owner has probably heard every joke and pun imaginable re. his custom and has come to dread the look that people get in their eye just before they come out with the tired witticisms. I shall leave him in peace.

I will say this much. I’ll bet the builder was tempted to reverse the side chrome accent strip and stars, but resisted it.