Going to car shows is sometimes an exercise in patience – waiting until the car you want to photograph is free of strolling gawkers or until a glacier whizzes by…either one…and sometimes an exercise in tasteful criticism. Not that you are allowed to voice it – even the worst cars are there because someone thinks they are the best cars, and gentlemanly behaviour prohibits you from suggesting otherwise. But it is rare that I can go to a show and see a car that I would like to drive.

It’s not that I am mega ambitious – I drive a little green Suzuki Swift all day, and am perfectly satisfied with it. I can look at exotic vehicles all day and not raise a sweat or anything else. But occasionally I do get the wannas. This Dodge has excited the feeling. 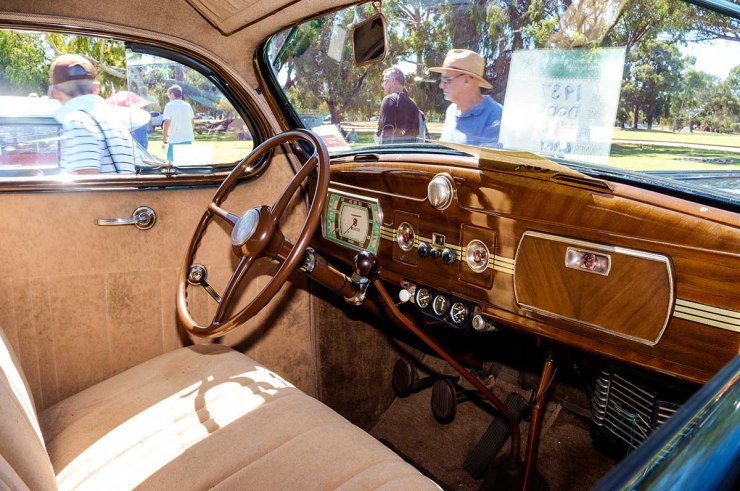 It is a simple pre-war coupe with a rumble seat. Still in LHD form. As stock as they come, if you disregard the metallic blue paint finish. The interior has all the characteristics of the era – deco dash instruments, painted finish, and long gearstick. I see an air conditioner there, which bespeaks a larger engine, perhaps. But the whole suggests the best sort of daily driver.

I was also charmed and enlightened to see the handle on the rear part of he cabin. Now I finally know how they secured the rumble seat in a closed position. A daunting place to ride but I’ll bet there would still be takers wherever you went.

Again – if they made them look like this now, we would buy them in a second.