Hot rod and custom car builders are more courageous than the average mundane motorist. They dream more and dare more.

This is seen in all the rat rods, street racer machines, hot rods, low-riders, and show cars. Every one of these is the labour of both a great deal of love and a great deal of money. And also a great deal of a patience dealing with the licencing authorities. As soon as any of the car enthusiasts thinks up the most modest of modifications – fitting a fighter plane engine to a family sedan for instance – they have to commence a round of grovelling negotiations with the joy-spoiling jobsworths at the vehicle department.

But one good thing that can be done is a coat of paint. As long as the re-spray is a simple modification of the original scheme, the official nay-sayers do not bother to take an interest. Perhaps even they have their limits…

So that would likely explain the new coat of paint on UHN-661. It’s a Morris 1500 from the 70′ that was seen in the Big Al’s Poker Run of 2016 in the red and black scheme. The bonnet then had a wrap on it simulating a carbon fibre panel. A particularly specific look.

Well, time has changed, and a year later has brough forth a retro look to the Morris – a metalflake paint job in dark bronze. It is a fascinating finish, and as an older car enthusiast, I must say I prefer it to the carbon fibre look. As with all show-car finishes, it has a real depth to it – not least because the actual metal flakes need more support medium to remain suspended in the finish.

Now rodding a British-built car is unusual – I counted less than half a dozen on the field last Saturday. This is odd in a country that was sustained by the British car industry for longer and to a greater extent than that of the North American manufacturers. One would logically expect there to be more left-overs from the era that could be made into hot rods. It is unusual to see – as unusual as the use of Japanese cars for the same purposes. Even rarer are continental cars turned to the hot rod or custom side – any cars still extant are generally refurbished as veteran or vintage types. 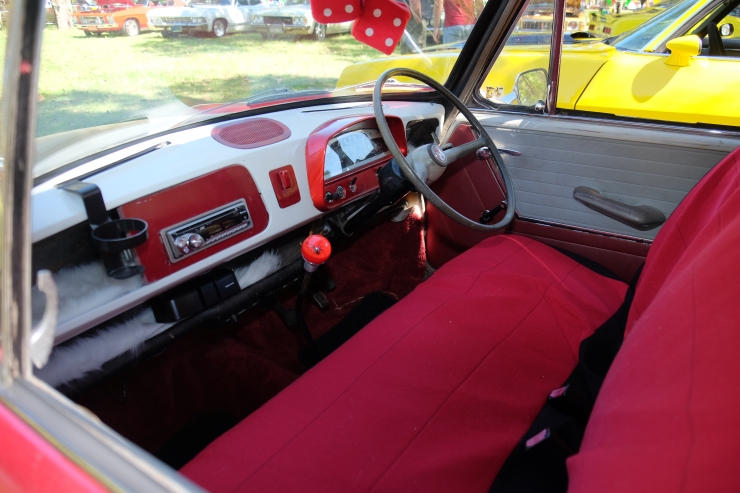 I hope that UHN-661 continues to be remade as the time goes on. I see she now has lakes pipes, though I have no idea whether they are connected to the exhaust or, for that matter, to a lake…Well, they look cool, nevertheless.