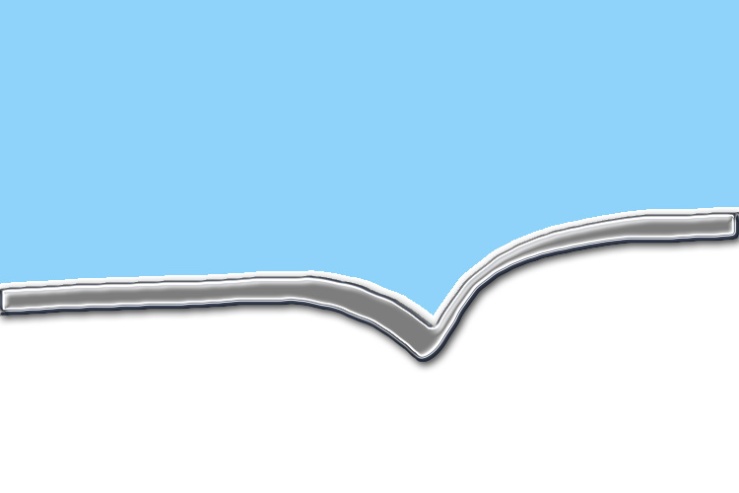 Sounds like a football team, doesn’t it. If you think of it, maybe it is – the Manchester City team has this sort of light blue and white as a team uniform. You would think that it was a standard sort of thing – indeed there are internet images of the mid-50’s Ford sedans and Victorias painted in the scheme – but none of the internet references exactly agree on the shades of blue. I am not going to guess at the factory names and I dare not suggest that these two Fords have been resprayed in anything other than factory paint. People are sensitive about that. 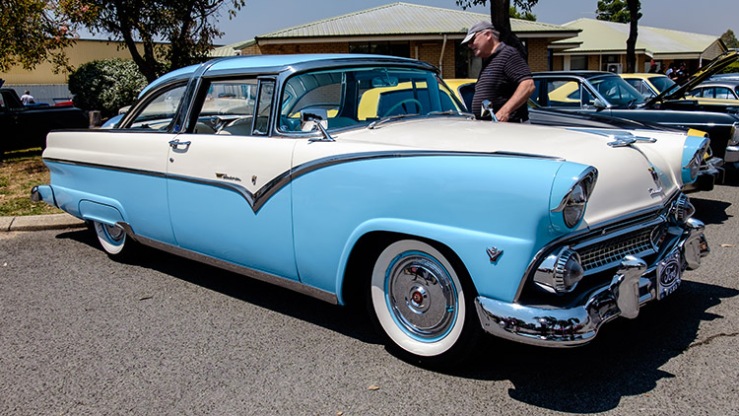 Actually, internet research for these two blue paint colours has shown just how spotty that electronic resource can be. There are paint charts reproduced from period sources for a number of manufacturers; Ditzler, PPG Industries, Acme ( good ‘ol Acme…), and Rinshed -Mason…but none of the sources seen actually say Ford Motor Company, much less Ford Motor Company of Australia. I am left wondering if every can was different and every can was mixed up out of a big vat round the back of the works just before it was sprayed… 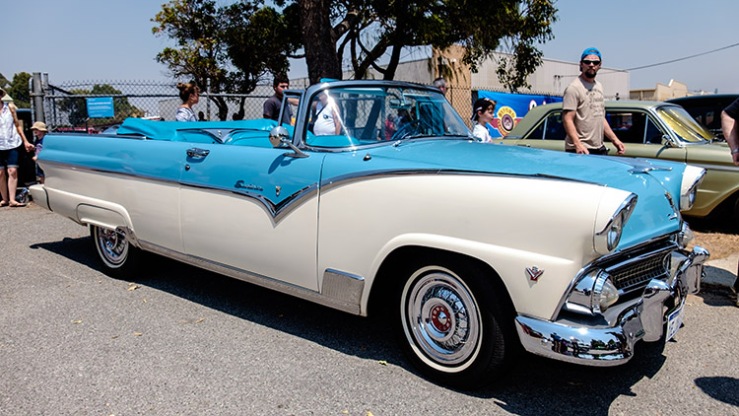 Well, anyway, here are two two-tone 50’s Fords at Gillam Drive that feature reversed schemes. You can trace the panel and upholstery pictures and see just how close the pattern was followed in each case. You can exercise your preference as to which version looks best. The common factor is the quality of the work and the retro finish to the cars. 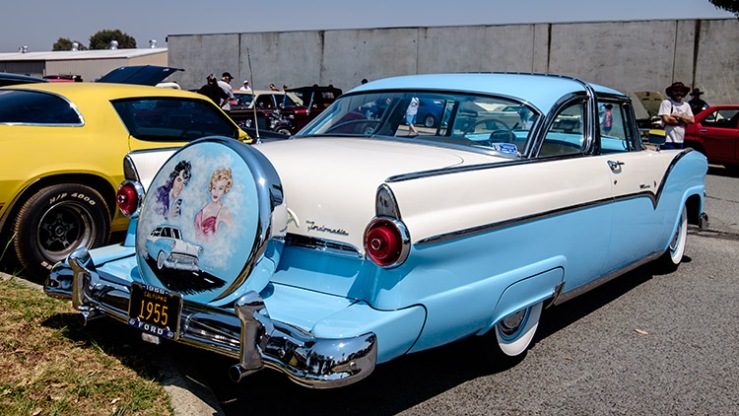 The individual touches are what make each car a different tune. 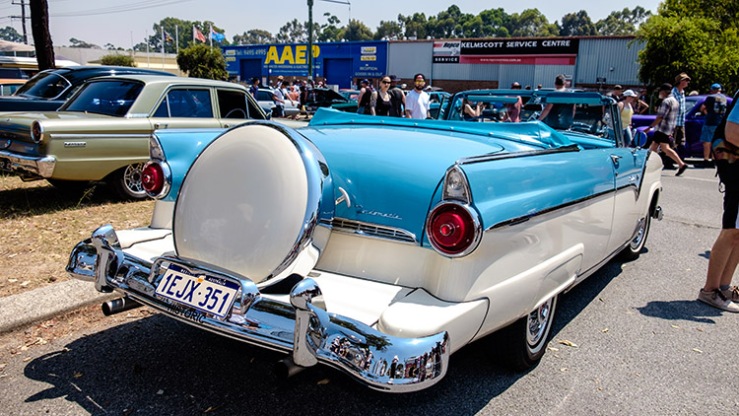 The convertible exudes a sporting atmosphere with the centre console ( and drink holders ) and wire wheel hub caps. Note the electric window switches and the additional instruments below the dash. Perfect for a late afternoon cruise along a beachside in spring. 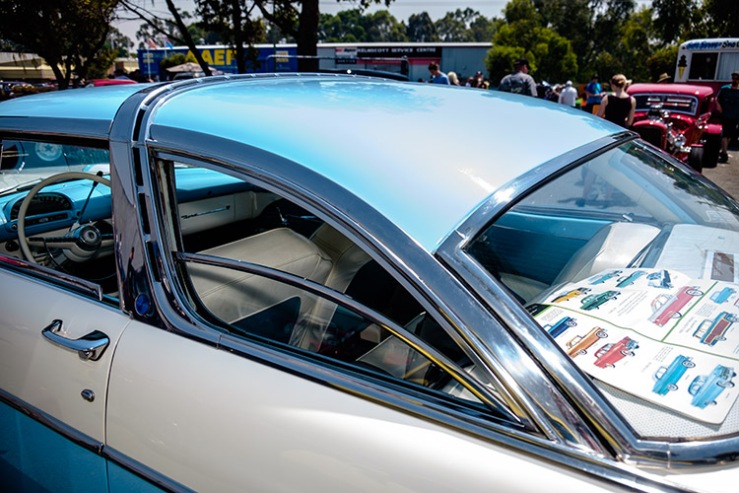 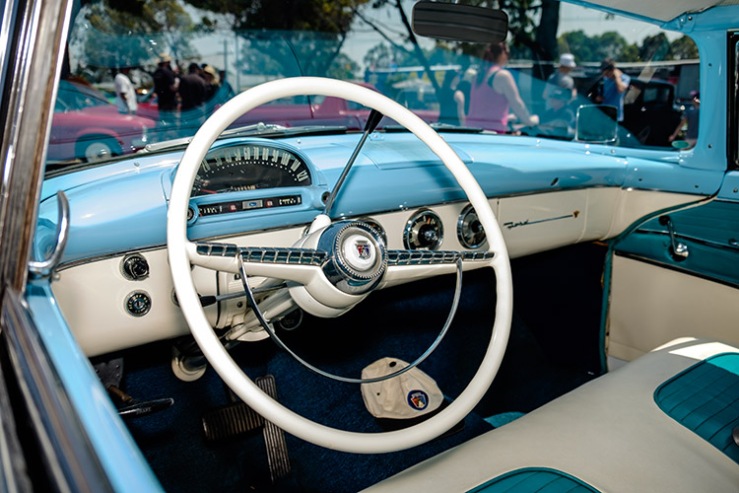 The Victoria has the distinctive chrome pillar and overlay that separates front and rear roof. Some of the cars referred to as Skyliners had a clear plexiglass with green tint over the front seats. I could see it being a novel attraction in a cooler climate but a real broiler in the Southern US or Australia. This one is the slightly less expensive steel top, and I’ll bet the driver going home from Gillam Drive was glad of it. A slightly more stock and slightly less luxurious interior – you have to crank your own windows. But note on one view how the rear window disappears into the side panel on a rather odd angle. This roof line is one of the last flowing lines before Ford decided to make the angular rear pillar of the 57-58-59 designs. I must say I prefer this line, as well as the line of the ’60 and ’61 designs, to the angular one. 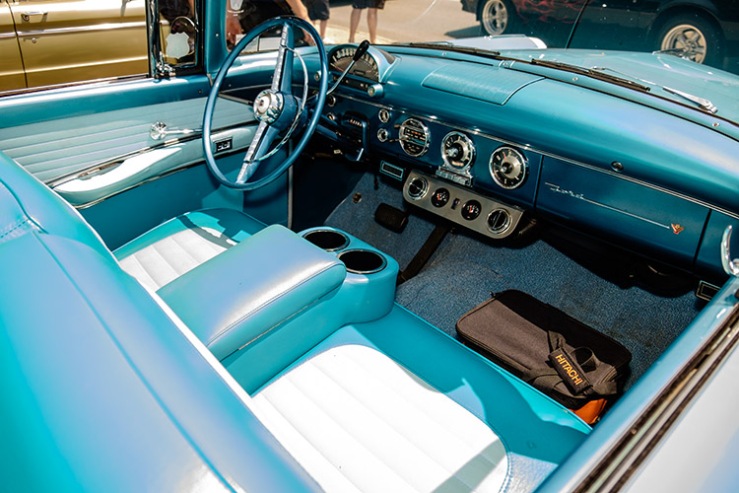 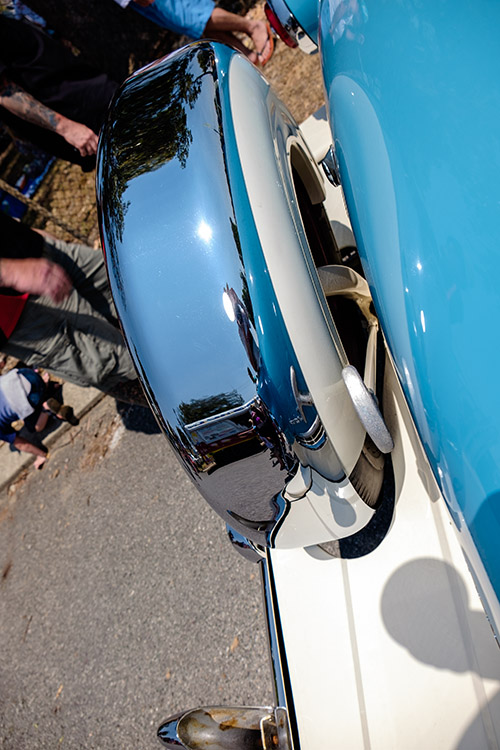 Both vehicles have a continental extension and spare. These are possibly practical, but I suspect that they are chiefly decorative. The one with the celebrity portraits certainly is. I was also delighted to discover the release handle on the other one – this is a detail frequently missed on custom cars…yet you have to have some way of getting the thing to let go, don’t you? Don’t you wish that they would include that much chrome on modern car designs? 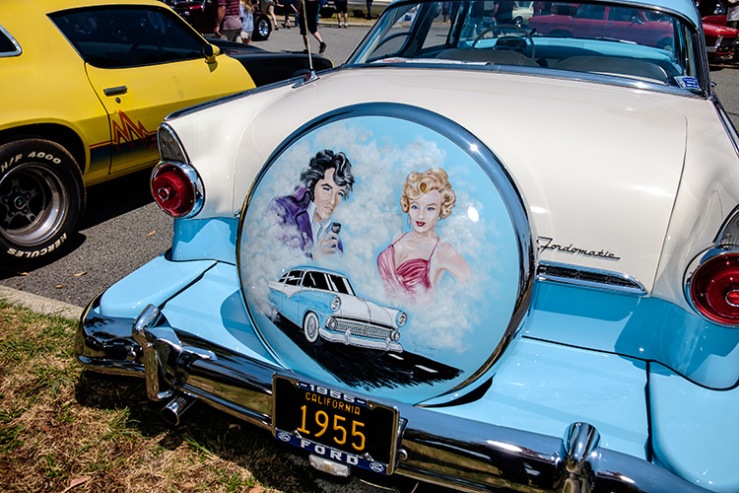 Actually, I’d just settle for the two-tone colour choices that were available then. I don’t even need metallics – just two colours.