If you think that sounds a little crass, how would you like it if I wrote: ” Show Us Your Trunk “? Not much better, is it?

Every year at the shows I take the front 3/4 view of the car as the main signature view. Then some details, and the interior, and – if there is enough space – a direct side view. In some cases in the past I neglected to add more to  this and to picture the rear panel. I am going to make sure that I always remember to include this in the future as it is one of the most user-friendly areas of the car.

Perhaps user-friendly is not quite the right phrase…let’s say user useful, if that is not too strained and expression. People spend inordinate amounts of time and money on the engine of their personal car – followed in some cases by a lesser amount on the interior cabin space. ( is some cases they spend nothing at all on it and it costs them an absolute fortune…) But the bit that is the most useful – the boot or trunk area – is a neglected afterthought. Yet, where are they going to store the beer crates or the rock and roll records…the fitted luggage…the engine parts that they bought but have not worked up courage enough to show to the wife…why the boot of course.

Here’s a selection of back ends from Gillam Drive:

Our feature car, the blue ’33 might have a rumble seat in there, but as there is no way of getting into it, I’m betting not. You could not bear to scratch that magnificent paint job scrambling over the fenders.

The brown Buick has the sort of trunk that takes leather suitcases or wicker hampers of cold chicken and champagne. Not at Gillam Drive in November, mind, as the temperature is traditionally 147º in the shade and there isn’t any shade.

The blue ’39 has a wonderfully styled line to the boot and the builder of the car has been wise  and tasteful in preserving it. Probably plenty of room in there.

The green Holden also has plenty of room and the boot extends in under the seats. Modern cars can be surprisingly roomy back there – the wife’s Toyota being a case in point – it absorbs far more stuff that you would think for the shape of the metal. And I remember seeing a new 300 Chrysler that seemed to have enough room in the boot for an entire sofa. Pity about the spoiler on the boot lid as it does. 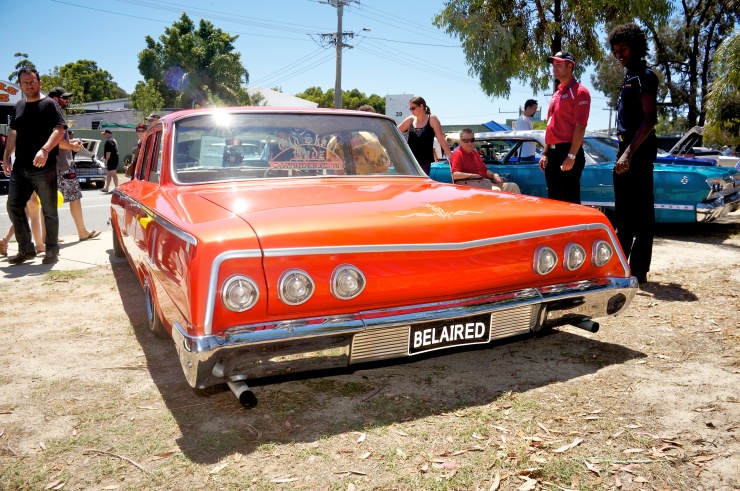 The orange Bel Air has the rest beat as far as vast open space – as they did in the 60’s. You pay the price of more metal, but you get the advantage of enough carrying capacity to match that of the cabin. ie you can fit all the bags of all the riders.

But the champ is the ute. It always will be, and now that the hard cover for a ute bed has become an established thing…remember that there were few of these in the 1990’s…the drivers can secure their stuff against thieves and road spoilage. Were I to get another ute I would serious consider a functional hard cover – as well as a bed liner.