They introduced the Ford Thunderbird two-seater motor car to try to recapture some of the market from the British and European sports cars and the Chevrolet Corvette. The first T Birds were not sports cars in the true sense, any more than the Corvette was. But they were desirable vehicles never the less and deserved a name. The manufacturer’s had long since cycled through words like “roadster”, “convertible’, “speedster”, and “coupe” and they had taken on meanings of their own. In the case of the Thunderbird something new was needed – Deerborn came up with “personal car” and advertised it as that.

Well, it took the imagination, as the Mustang did a generation later, and Ford profited mightily because of it. In both cases the original lithe design eventually bagged, sagged, and dragged into gross parodies, but the phrase is just as good as it was – indeed it can be used now for all sorts of things.

“Personal Car” is a broad category, and I intend to celebrate as many corners of it as I can explore. As a working definition I ntend to regard any vehicle that has been modified – however slightly – to the whim or the taste of the owner as a “personal car”. This means it will act as a lens to let us see something of the mind of the driver. We can approve or not – but we still look.

And so I show the first of the personal cars – in this case a Ford Thunderbird seen at the recent Father’s Day Hot Rod show in Fremantle. The owner has elected to keep it pretty standard as far as external presentation. Unfortunately the format of the show grounds didn’t let us see into the interior to see if the car had fuzzy dice on the dashboard or cruising lights – we must just use our imaginations.

The colour scheme looks authentic – indeed I think I recall a hit of the 50’s that featured a black and white T Bird as the heart’s desire of the The Delicates – they were going to drive up and down the boulevard ” happy as we can be “. They were less than complimentary about the motor as they used the refrain ” Putt Putt Putt…” Presumably FoMoCo forgave them for the gaffe in exchange for the publicity.

Want to cruise? This is the car. Nothing that goes down the road under a hard top these days makes you look as cool as this. The 888 Winthrop and Leeming cowboys will fade away into the background. Likewise the Subarude WRX pests. This is a car that has existed longer than they have been eating solid food, and shows them where it all came from. And where they can go. 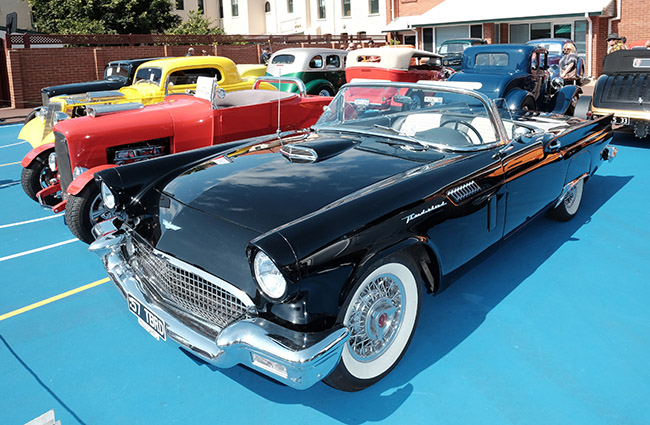