After I had inspected this caravan at the recent Nostalgia Drags  – Kwinana Motorplex – I sat down and had a good think. It raised a number of questions in my mind.

Who had it belonged to? Ozymandias was one suggestion that came to mind as I looked upon the works and despaired…But apart from silliness, this would have been a large part of someone’s life in the 1960’s – that is a big van. And it would have been an expensive thing. 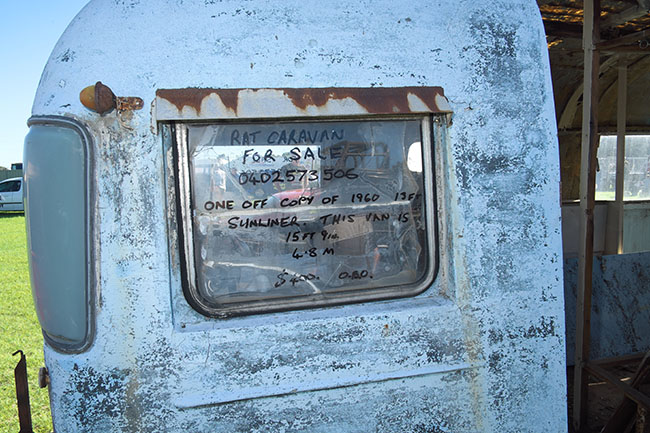 How had it fallen upon such hard times? Cars are stored in barns until they are found…but this caravan gives the impression that it WAS the barn in which other things were stored. The gutted interior suggests that either the things that were stored in there decayed rather spectacularly, or that someone wanted to tear it apart to find something. Was Indiana Jones involved?

Of course time is time – this is over half a century old. It may have been lived in by generations of people and perhaps progressed from a prized possession to a derelict embarrassment through the life of the owner. It would be interesting to hear the story and to find out what sort of terrible storms tore the surface off it.

Fixer-upper? Well, worse items have been rescued by the passionate…but this seems to need an entire army of builder’s skills to refit it into a habitable van. It might daunt even a gypsy.