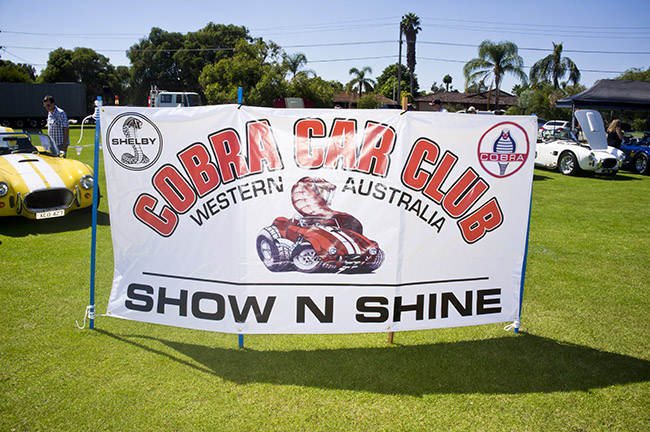 It was just going to be a normal Sunday – up on the studio roof repairing a leak with an aluminium plate and silicone sealer, then home to spray paint the top of a little Pontiac Catalina, then finish an Augustan novel. Then The Wife alerted me to a Rotary fair with “racing cars” at our local shopping centre park. Too intriguing to miss.

Turned out to be the Cobra Club. And they do things well – I suppose they have enough money amongst them if they can afford the cars. They had a compound, a tent, a shady nook, and more fancy iron and aluminium than you could shake a stick-shift at. 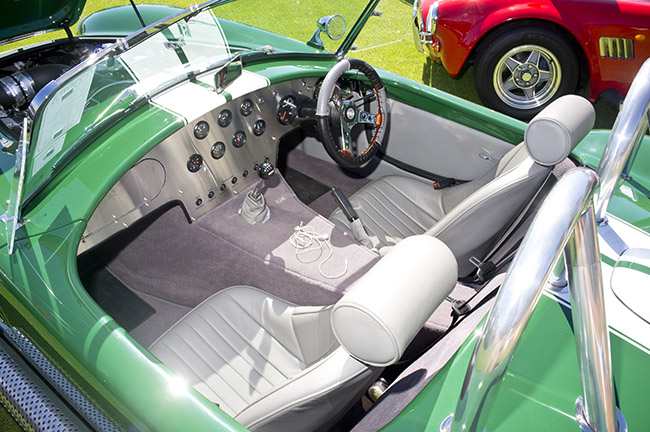 I have long since ceased to understand what an authentic Cobra is. I thought I knew in the 1960’s and I was sort of almost up-to-date with the AC cars and the ancestry. Then every second week Carroll Shelby put out a new car or put his name on something out of the Ford factory until eventually I grew nervous. When the Cobra kits, replicas, counterfeits, clones, and mock-ups started to flood the market it all became too much. I think I blacked out when the Trabi factory in East Germany issued a Obra sports car with a body made largely of pressed bread.

Finally freed from all necessity to be scholarly, sensible, or right, I thoroughly enjoyed seeing the GT40’s and Cobras at the Rotary show. I particularly liked the AC racing saloon, though I wished we could have seen what the engine looked like. Not that I am suspecting a Trabi in there – I just wanted to see how English the wiring was…

The delightful thing about seeing the various Cobras was the variety of detail and style of interior. You may have your own opinion as to wooden dashes vs metal vs glass fibre – and then add your own preference as to seat style or fabric. I could see logic in all of them. Some seemed a little cheap, but remember that Cobra cheap buys a lot of dinners anyway… 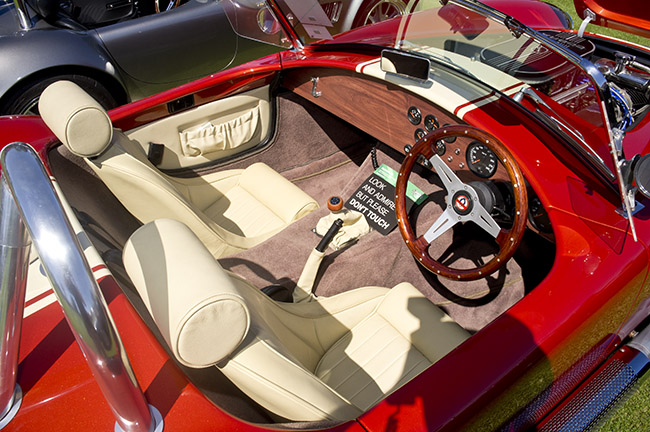 Of course the basic Cobra body looked somewhat similar in all cases – but the details of scoops, exhausts, lights, and bars was interesting. I must say I thought the tail lights and rear indicators were always a little utilitarian in my opinion. But then that is styling and the opinion of a man who cannot afford to buy one of the cars or to keep it in tune really counts for little. Suffice it for me that a couple of decades ago a friend had the use of a Cobra for some months and contrived one day to take me for a spin round our local freeway system in it. I thoroughly enjoyed the sensation and as I did not have to pay for it or worry about it, the experience was perfect.

Note – the new flash arrangements for the Fujifilm X100 – a Metz CL-1 with a big external battery – made it easy to overpower the sun for fill-flash…even on an extremely bright Sunday morning. This will probably be the car show rig for a long time to come. It is soooo simple – point and shoot.